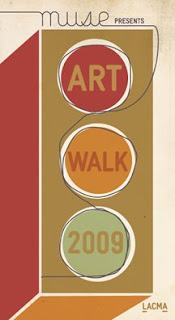 Jane O'Neal and Anne Veraldi's exhibition is currently running at the gallery through June 20, 2009, so please stop by and take a look.

Join DNJ Gallery at the LACMA Muse Art Walk taking place next Saturday May 30, 2009 from 12-8pm. Come join the gallery for an Artist Talk with Jane O'Neal at 1:30pm, and don't forget about our happy hour from 4-5pm!

The Muse ArtWalk 2009 is happening once again on the Miracle Mile. Four museums will be offering free general admission, more than twenty galleries will be participating in a self-guided tour, and restaurants throughout the area will offer special discount and offers. Be sure to check out the schedule of events for more programming information. Click here for a list of participating galleries within the Miracle Mile Area.

Later that evenng, Muse presents its ArtWalk 2009 After Party featuring Vaud & the Villains at the El Rey Theater. Doors to the After Party open at 8:30 pm. After Party general admission tickets are only $25 for Muse members, $40 for non-Muse members, and are extremely limited. Because you are on the DNJ Gallery mailing list, you can save $10 on tickets by entering the promo code musewalk. To purchase general admission tickets, click here, call 323 932-5861, or visit LACMA's box office.

Posted by dnj gallery at 4:05 PM No comments:

Madrid's Exit Magazine features The Red Purse by Holly Andres, in Martha Langford's article Down The Rabbit-Hole Redux. The Red Purse was part of Holly's Sparrow Lane exhibition, which was shown at DNJ Gallery from December 20, 2008 - Feburary 14, 2009.

Langford, Martha
Down The Rabbit-Hole Redux

Once Upon a Time… is a very curious collection that grows curiouser (and curiouser) on pursuit. The editors’ choices will surprise many – they have certainly surprised me. Somewhat more reserved than the Alice impersonators, emulators, and avatars who have entered my life through these images, I have wondered how I fit into this “fairy tale world.” Perhaps my excursion “once upon a time” into the photographic imaginary inspired this commission, for there are certain happy coincidences. Image & Imagination introduced me to the work of Polixeni Papapetrou and Olympia her Dreamchild (2002-03) in stunning recreations of Lewis Carroll’s photographic Wonderland (2003-04). Equally arresting was the apocalyptic, postcolonial symbolic of Tracey Moffatt in her series Invocations (2000)

As a lifelong skeptic (a Scrooge-like seeker of photographic proof), I was moved to dream the images these artists put before me, to fill them with my own “dense imagining.” For me, this was a mode of photographic experience, a way of seeing that could be focussed on any photograph, and extracted wonders from the most ordinary things, the most banal or inscrutable snapshots. In short, my notion of the photographic imagination was fully vested in spectatorial engagement. I was less interested in images that tried to represent dreams and fantasies than in the inventive capacity of the spectatorial mind. Was this guarded or conservative on my part? Perhaps. I have always relished George Bernard Shaw’s intolerance for photographic theatrics, his dismissive comments, such as: “The camera cannot decorate; it cannot dramatize; it cannot allegorize.” I also know where I first encountered the Shavian attitude: in the pages of John Szarkowski’s The Photographer’s Eye, rallying Shaw to the cause of Modernist purity: “There is a terrible truthfulness about photography” that preserves the reality of the model, even if the photographer “dresses her up and photographs her and calls her Juliet, but somehow it is no good – it is still Miss Wilkins, the model. It is too true to be Juliet.”

Photographs strictly speaking are conservative by nature and photographic theorists suffer from the same deformation, always scratching at the image for something of the terrible truth, the Real. Or is that just me? Looking over the contents of this issue, I found myself sinking in what seemed at first very shallow waters. As an essayist, I failed the affinity test more than once. But the social historian in me was consistently intrigued. The reins of the Real had been handed to artists whose appeals to literary and pictorial conventions could also be read as cautionary tales about mediated identities, collective psychosis, and the sickening planet. The temporal whiplash alone was kind of exciting, as was the discovery that everything old was new again, in the virtual form of alternate universes or video games. This collection follows a dotted line to photography’s invention and loops back through a history of visionary art inspired by poetry, folktales, religion, colonial hubris, popular novels, and hashish. Its ambitions are rather more wordly, than its evocative title would suggest. Once Upon a Time… will discourage most lovers of straight photography, while attracting a compensatory number of adepts and advocates, devilish or otherwise. Nothing succeeds like success, as William Wegman’s fairy-tale corruption of his extended portrait of Man Ray proved so long ago. Scanner-based nostalgia, exemplified by the work of Maggie Taylor, has also carved out a space in the photographic artworld. Sentimentality is a reliable commercial carrier for escapism and consumerist come-ons. I know those Wonderlands pretty well, thinks I, so down the rabbit-hole I go, free-falling in the company of good and evil Alices, and clinging to Ariadne’s thread. Drink me. Okay, bottoms up. Bear but a touch of my hand and you will be upheld in more than this. Famous last words from the Index, the ghost of Christmas Past (...)

Posted by dnj gallery at 4:11 PM No comments: