Congratulations to DNJ Gallery artist Bernadette DiPietro for her inclusion in DEN Contemporary's group show titled "Not In My Backyard" opening May 20th at the Pacific Design Center, #B275! And a big thank you to Donna Napper for thinking of us! :-) The exhibition will run from May 20 - June 30, 2010.

Posted by dnj gallery at 2:42 PM No comments:

A big thank you to all that attended our Saturday night opening of Alchemical Feedback by Suzy Poling and Representations by Cynthia Greig! These exhibitions will run through July 10, 2010 so be sure to bring some friends by the gallery to see the work again.

Posted by dnj gallery at 1:46 PM No comments: 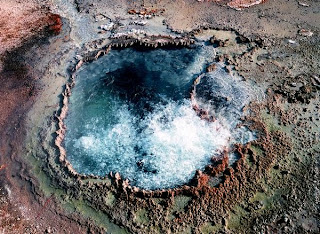 Pal Suzy Poling's exhibition Alchemical Feedback : Geysers & Ellipses opens on Saturday at DNJ Gallery in Los Angeles. I've seen the prints and they are otherworldly in just the best way...documents and creations that create a complex dialogue together. It's ambitious stuff and still totally delivers.

What's it all mean? Here's the statement:

Alchemical Feedback is an exhibition of two different bodies of photographic works that compare and share the relationships of chemical reactions, spontaneity and permanence. One of the series of photographs is taken of geysers from Yellowstone National Park, where Earth's feedback is presented in one of its finest forms. The geysers are a magma phenomenon, which is made up of strange colors, bacteria mat and mysterious boiling pots of water and acid.

Poling contrasts the Geyser images with a project of experiments made with chemistry, oils, and decay and burned photographic film. This series called Ellipses is equally accidental and unexpected as the mysterious Geysers. These images contrast the human-made versus what is made by the Universe, as it describes what is found and what is made up. There is an arc between these two works as it bridges the need to comprehend our relationship with Astronomy exploration images and also how surreal the Earth can look. The work suggests a human's need to understand nature's unknowns as both projects embrace spontaneity and regeneration.

Thanks to Artcards Los Angeles for posting an exhibition listing for Suzy Poling's "Alchemical Feedback" and Cynthia Greig's "Representations." May 8 - July 10, 2010 at DNJ Gallery. 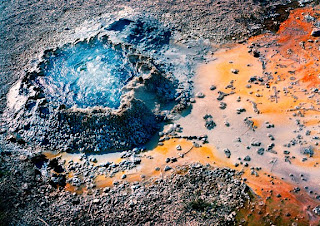 Posted by dnj gallery at 5:32 PM No comments:

A big thank you to Aline Smithson for her awesome LENSCRATCH review of DNJ Gallery artist Cynthia Greig and her exhibition titled Representations.

I've been a big fan of Cynthia Greig, the person and the work, ever since I discovered her early series, Life Size. A Detroit photographer, Cynthia has been making work that explores the exchange of influence between perception and experience, and the photograph's unique role in negotiating what we consider to be real or true. Cynthia received her MFA from the University of Michigan in Ann Arbor after studying art history and film making at the University of Iowa where she received her MA in 1988, and also co-founded the Tristan Tzara School of Poetry with Joyce Beatty and Todd Nelson.

Cynthia has a new exhibition opening at the DNJ Gallery in Los Angeles on May 8th that runs through July 10th that showcases her series, Representations. I'm really looking forward to seeing this series on the the gallery walls, as it has been celebrated as a runner-up for the Aperture Prize, and exhibited in solo and group shows around the country. This series is also featured in the new issue of Diffusion Magazine.

Representations explores the concept of photographic truth and its correspondence to perceived reality. As a kind of playful homage to William Henry Fox Talbot's treatise, The Pencil of Nature, the series, combines color photography and drawing to create what I like to call photographic documents of three-dimensional drawings.

Gathering everyday objects from the recent past, I first whitewash them with ordinary house paint, and then draw directly onto their surfaces, creating visual hybrids that appear to vacillate between drawing and photography, black-and-white and color, signifier and signified. No digital manipulation is involved, but the camera's monocular point of view is imperative. In stark contrast to Cubism's merging of multiple perspectives, Representations exploits the limitations of a singular point of view, drawing attention to the deceptive nature of first impressions and the illusion inherent in any representation. In an age of artifice, how do we determine what is a truth or lie? How do visual conventions and style affect our perceptual expectations and influence how we see and experience the world around us? Ultimately, these images intend to examine the nature and identity of photography--our assumptions about what is or makes a photograph and its relationship to what we perceive and experience to be real and true.


By: Aline Smithson
Posted by dnj gallery at 3:19 PM No comments: