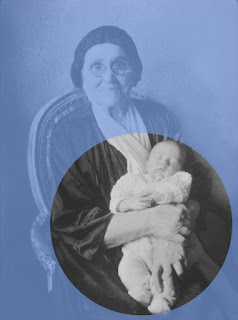 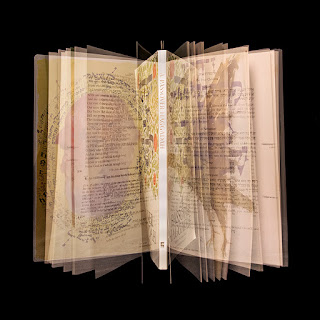 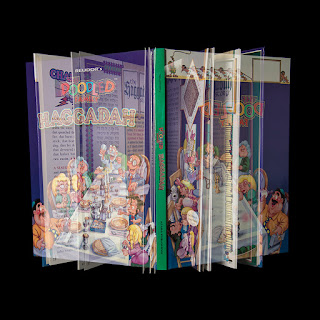 Keeping the Faith: An Artistic Celebration of Judaism; Paso Robles, CA
Posted by dnj gallery at 6:44 PM No comments: 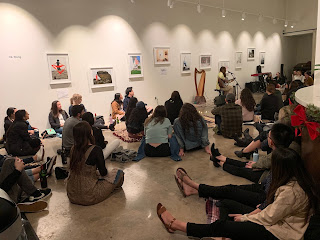 A Sofar gig is a show held in an unique venue, like someone's living room or an antique shop. It typically features three artists, playing four songs each. Every lineup is specially curated to give the audience a diverse show.They are live in 441 cities worldwide.
Posted by dnj gallery at 9:47 AM No comments:

OUTFRAME is a creative industry award for artists and professionals in advertising. Dinesh Boaz shot the image by helicopter over the glacial rivers in Iceland this past September.

From December 16- 22, his work will be displayed on the screen above the subway stairs at the Astor Place subway station on Broadway and 8th Street in NYC.

** Dinesh will exhibit his photographs at dnj Gallery in March, 2020 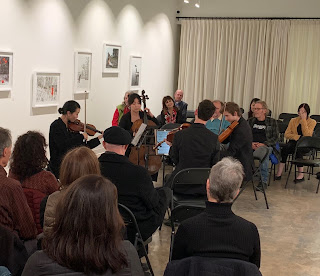 Kaleidoscope performs orchestral music that speaks profoundly to our community and is both representative of its time and timeless, whether written today or centuries ago. Kaleidoscope stretches the boundaries for what is thought possible without a conductor, both by musicians and audiences, to allow us all to grow through the process. By regularly collaborating with living composers, their music represents our time; and, by designing programs that explore less conventional concert experiences, they allow audiences to feel more personally connected to music and the musicians who perform it.

Posted by dnj gallery at 1:50 PM No comments: 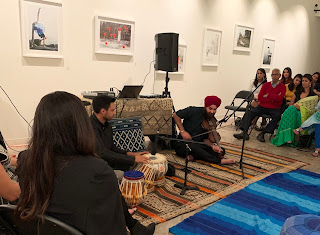 The performance was set against the beautiful background of dnj Gallery's group photography exhibition entitled "Awareness," which features six artists who question our understanding and ability to perceive and become aware of our own environment.

Guests were encouraged to explore the exhibition during the event.
Posted by dnj gallery at 3:50 PM No comments:

“Awareness,” exhibiting work by: Allan Gill, Janna Ireland, Laura Parker, Ni Rong, Bill Sosin and Robert von Sternberg. A continuance of the gallery’s dedication to presenting photography that emphasizes concepts, thoughts, and impressions, brings together five artists who question our understanding and ability to perceive and become aware of our own environment. The images in this exhibition portray a level of consciousness that is not a final deduction, rather a presentation of various solutions and that add to an elevated state of knowledge.
Posted by dnj gallery at 11:38 AM No comments: 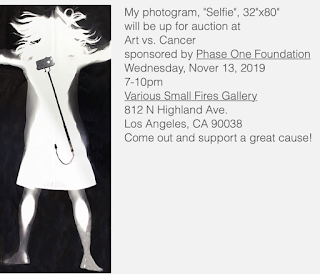 "Selfie",  a piece of Karen Amy Finkel Fishof's newest artwork series, is donated to Art vs. Cancer.  It is a photograms, or a camera-less image that is made by placing objects on sensitized paper, and exposing all to light. According to Finkel Fishof, this technique allows her to share her thoughts and ideas, and  “I consider it drawing with light. It gives me the strong imagery and narrative, with hidden subtleties, … ” 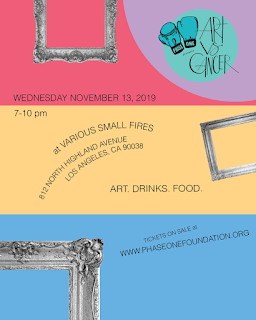 Posted by dnj gallery at 9:07 AM No comments:

"Ellen Cantor is a Southern California artist who uses the camera to reimagine the family photo album and objects that hold personal histories in order to explore the distillation and persistence of memory. 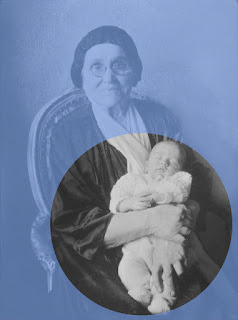 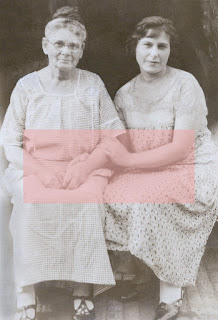 "Given my story, it was inevitable that the photographic series, Prior Pleasures, by Ellen Cantor attracted me like a magnet full of memories: with the technique of multiple exposure, the American photographer manages to recreate the activity of leafing through a single image. a book, an action that could last a few minutes or an entire afternoon, as she no longer needs shots to bring us back to the moment we browsed for the first time, or even another, Robert Louis Stevenson's Treasure Island , to when we stopped to check that the image we had created in our mind matched that of the illustrations. It is not even necessary to specify a moment of time because immersing yourself in a book has always been synonymous with losing any conception. 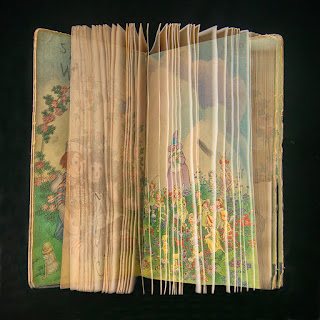 Posted by dnj gallery at 3:41 PM No comments:

The collaboration between fine-art and music continues ...

with the 2nd performance of Sofar Sounds
(secret gigs and intimate concerts). 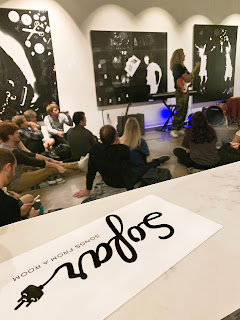 A Sofar gig is an intimate show held in an unique venue, like someone's living room or an antique shop. It typically features three artists, playing four songs each. Every lineup is specially curated to give our audiences a diverse show.

Posted by dnj gallery at 6:10 PM No comments:

From the Permanent Collection of the Museum of 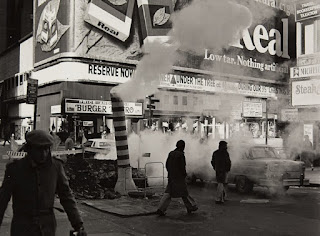 dnj Gallery and the Museum of Photographic Arts (MOPA) presented a special screening of The Naked Eye, a 1956 American documentary film about the history of photography directed by Lou Stoumen. Nominated for an Academy Award for Best Documentary Feature, this film and conversation will be hosted by dnj Gallery Director, Pamela Schoenberg, MOPA Trustee and dnj Gallery artist, Suda House, and MOPA’s Adult Program Manager, Kevin Linde. 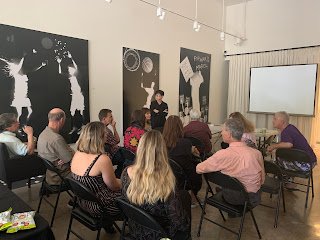 Photographs by Lou Stoumen are available in print form for $250.
Posted by dnj gallery at 6:31 PM No comments:

Thank you to those who attended recent artist talks with
Karen Amy Finkel Fishof and Ryan Linke.
Exhibiting through Saturday, October 26th. 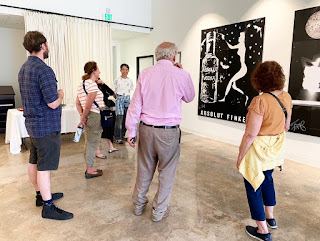 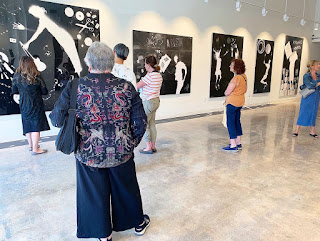 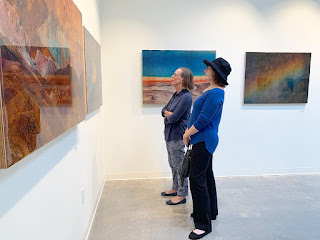 In the Main Gallery, "Radiate" (by Karen Amy Finkel Fishof) is a collection of photograms, camera-less images that are made by placing objects on sensitized paper, and exposing all to light. According to Finkel Fishof, this technique allows her to share her thoughts and ideas, and “I consider it drawing with light. It gives me the strong imagery and narrative, with hidden subtleties, … ” The artwork explores themes such as religion, parenting and politics. “Protest”, for instance, asks several questions regarding the Women’s March in 2017. “What was going through the minds of the women at the Women's March? Why were they there? Did they have a common purpose or did they come for different reasons?”
Born in the Bronx, Finkel Fishof became involved in the New York art scene in the 1980s, frequenting clubs with other known artists, such as Andy Warhol and Keith Haring, She apprenticed under artist, Marylyn Dintenfass and was greatly influenced by her dynamic color schemes and thematic artworks. Finkel Fishof attended Syracuse University where she received a BFA in painting. She studied a year abroad at St. Martins School of Art, London, UK, where she first started creating photograms under the same professors that worked with Gilbert and George. Finkel Fishof has generated art in a variety of settings, such as window display business creating designs for Macy’s, Lord & Taylor, Dress Barn and HMV record stores. She then took courses in graphic design, which introduced her to arranging the details on a flat surface. Presently, a large amount of her work is in private collections.
In Gallery II, dnj Gallery introduces Ryan Linke with a project entitled “Aquatic Figments.” His large-scale, wood panels merge colorful, photographic images with the pigment and texture of a base material. An example of such combination is “Infinite Horizons,” which especially illustrates the cross of colors between the image and the wood. Linke’s natural color palette is inspired by the uniqueness of our massive ocean. His work becomes almost meditative, and focuses our concentration on a single point of reference. According to Ryan Linke, “There are certain places where natural elements create landscapes that seem ethereal; unique colors that only happen a few times of year.”
Linke graduated from University of California, Santa Cruz, which allowed him to remain on the coast and continue his investigation of the water. He has since sold his artwork both commercially and privately, and exhibits his work in various venues around California. Ryan Linke lives and works in Venice, California.
Posted by dnj gallery at 5:06 PM 1 comment:

dnj Gallery presents a Collaboration between Art and Music 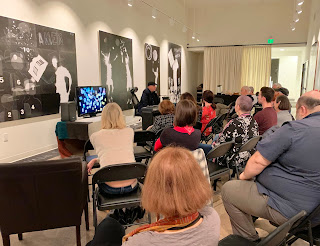