Please join DNJ Gallery from 6 - 8 pm for the opening reception of Michael Eastman's Vanishing America. Mr.Eastman will be at the gallery signing copies of his recently released book of the same name.

Gallery II features work from the series “Almost Home-Less” by Richard Gilles. Photographing different mobile homes across the West Coast, this body of work illustrates an element of American society that goes unnoticed. As in the ideas of the New Topographics movement, Gilles’ unbiased images illustrate the distinct personality of each vehicle, while at the same time, giving no direct insight as to its occupants. He asks us to take a closer look at the prevalence of the motor-home lifestyle and observe the camouflaged vehicles dotting our city streets, beaches, and rural landscapes. Gilles received a BA from San Francisco State University. He has exhibited in galleries through out the United States and has won various awards for his work. This will be his first show in the Los Angeles area.

We hope to see you tonight!
Posted by dnj gallery at 4:29 PM No comments:

George Eastman House in Rochester, New York will be including some of Eastman's early photographs in an exhibition of recent acquisitions entitled What We're Collecting Now 2008. The show will run from July 12, 2008 - February 8, 2009

What We’re Collecting Now is the annual exhibition of recent acquisitions to the Photograph Collection at George Eastman House. Curated by graduate students in the Photographic Preservation and Collections Management master’s degree program, the exhibition will explore international, contemporary interpretations of the ways people affect the places they inhabit.

The exhibition will feature artists Cecilia Arboleda, John Divola, Michael Eastman, Patrick Nagatani, and Simon Norfolk. The work represents diverse corners of the globe, encouraging viewers to consider the way humanity defines its places.
Posted by dnj gallery at 11:38 AM No comments:

View highlights from the Joe Goode lecture that took place at dnj gallery Saturday, May 17th during the Muse Artwalk. The show closes tomorrow- May 24th, but his work will still be available at the gallery.

Posted by dnj gallery at 4:27 PM No comments:

On May 15th, Michael Eastman's photograph, "Isabella's Two Chairs with Laundry, 2000" sold at Christie's London auction for $53,000. This is the second photograph from Eastman's Cuba series to sell at Christie's. 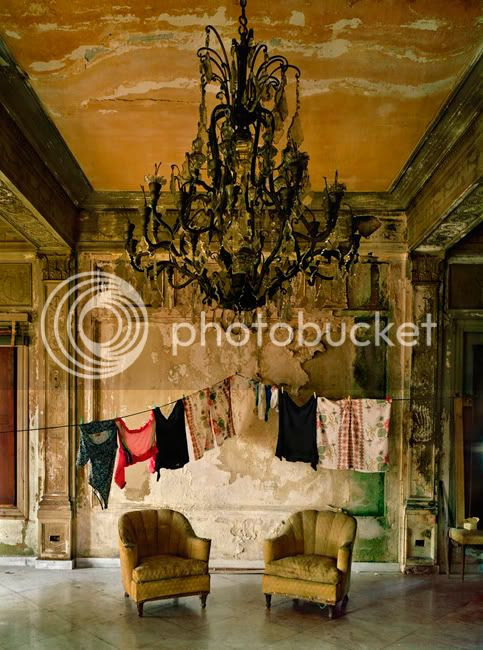 In Eastman's interview and article in St. Louis Magazine, it discusses the recent rise in value of his photography, especially in conjunction with the release of his new book, "Vanishing America":

"The coming months will be significant for Eastman—both because of the release of Vanishing America and because his work seems to be ready for a rise in value. Christie’s London sold the Cuba photograph Green Interior last November for more than $20,000 (the seller bought it three years ago for about $3,000), and the auction house is estimating another work, Isabella’s Two Chairs With Laundry, at $30,000 to $45,000 for a sale this month. How will the photographer handle such success? “He’s been out of fame’s glare long enough,” says his frequent collaborator Gass, “so when it comes, it will simply stir him.”

Images from all of Eastman's series are available for purchase at DNJ Gallery. The exhibition "Vanishing America" opens May 31st.
Posted by dnj gallery at 4:02 PM No comments:

Thanks to everyone who came out for the Muse Artwalk. It was a blast! For those of you who missed it, we will be posting a video of Joe Goode's talk. Meanwhile, enjoy the photos from Andy Schwartz's lecture and Joe Goode's walk through. Ashes will be closing this Saturday. 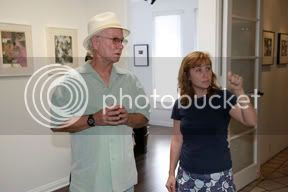 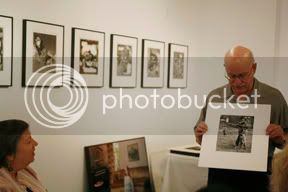 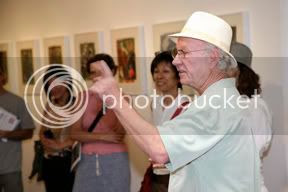 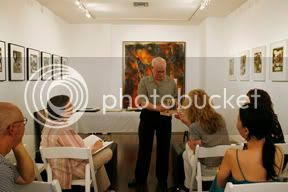 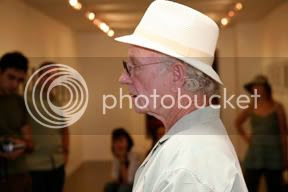 Posted by dnj gallery at 2:54 PM No comments: 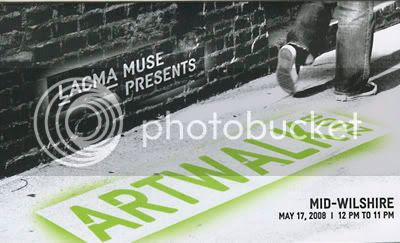 We are pleased to announce two lectures taking place in conjunction with the Miracle Mile Art Walk and Los Angeles County Museum of Art’s Muse Art Walk. Admission is free.

On Collecting Photography by Andrew Schwartz at 11:00 A.M.

Andrew Schwartz will present a lecture on collecting photography which will include examples of the photographic medium from its inception to the present. Mr. Schwartz has been a member of the Modern and Contemporary Art Council and the Photo Art Council at the Los Angeles County Museum. He is currently a consultant to DNJ Gallery.

Joe Goode will discuss his work in the exhibition "Ashes" which is on display at DNJ Gallery through May 24th. This show in particular revisits a curiosity Goode has always sought to examine—that of creation, destruction, and re-creation. It is a bold example of Goode's observations of life through art.

Experience more than 40 galleries and museums in mid-Wilshire.
Enjoy discounts at a variety of local restaurants.
Expand your knowledge with artist discussions and collection seminars.

Visit LACMA's website for more info on Muse Artwalk and After Party
Posted by dnj gallery at 11:24 AM No comments:

Artist, Michael Eastman is also featured in the May 2008 issue of St. Louis Magazine. To read the article, please click the link below. 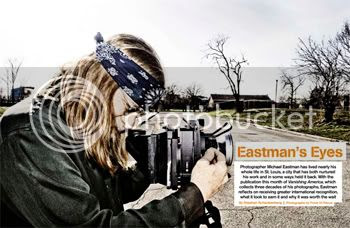 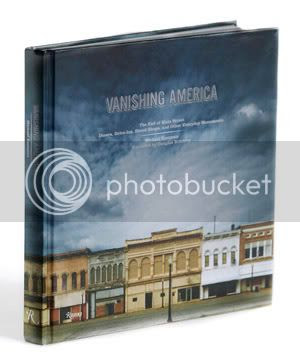 At the end of the road
A photographer captures the emptiness of the countless little Main Streets we've left behind. By Douglas Brinkley

In my time, I have journeyed through many small towns across America. Recently, I spent some time in Jordan, Mont. -- the Garfield County seat -- which prides itself on being the lonesomest town in the world. Blessed with no natural resources or historic tourist sites, located 175 miles from the nearest airport and 115 miles from the nearest rail depot, Jordan has very little to offer except solitude.

The county population density is 0.3 people per square mile. Perhaps because modernity has left Jordan alone, you can gaze at a forlorn bank building and tiny grain elevator and see faded storefront advertisements for Sioux City Sarsaparilla and the long-defunct Sellman's Motel. "No Loitering" signs are posted from long ago, when the cattle drives from Texas to Montana used to let off right here at Big Dry Creek.

Appearances aside, Jordan is not really a ghost town. And there are in fact thousands of similar offbeat places that have just receded from national consciousness. Chances are that each one of us holds a place like Jordan in our distant memory. Though photographer Michael Eastman has never been to Jordan, his images evoke its spirit for me just the same. Though each of the photos in his forthcoming book, "Vanishing America," shows a specific town, all of the photos evoke that same particularly American loneliness.

Virtually in all 50 states, cobwebbed symbols of our small-town past lurk behind the shiny newness of our fast-food junctions and interstate exits. The sheer thrust of American dynamism has left Main Street unloved. But if your eyes gaze at these neglected roadside monuments long enough, you can be transported back to the time when Main Street was the epicenter of most communities.

Eastman captures the hard-core essence of blue-smoked architectural loneliness better than any new artist I've encountered. I feel qualified to make this claim because loneliness has been my niche since youth. Where some might find gloom in these anti-Rockwellian photographs, I find a liberation from the glaring rat race of American life. In Eastman's images, a scent hangs in the air like that before a thunderstorm -- a time when another Chapter of Life is being closed with the slam of a screen door. Darkness is falling, but a red-brick afterglow lingers in Eastman's work so you can still marvel at another crumpled calendar page being tossed away, just as Thomas Wolfe and Edward Hopper would have liked it.

Photographs like these may someday be taken in downtown Los Angeles or the Vegas Strip or Suburbia U.S.A. Nothing lasts forever. But visages don't fade away without a fight.

Douglas Brinkley, a professor of history at Rice University, is the author of numerous books, including "The Great Deluge: Hurricane Katrina, New Orleans, and the Mississippi Gulf Coast." He also wrote the introduction to Michael Eastman's book of photographs, "Vanishing America," which is being published by Rizzoli this month.
Posted by dnj gallery at 9:54 AM No comments:

The Joe Goode exhbition Ashes is featured in this Sunday's Los Angeles Times Calendar section. Copies will be available in limited release Saturday and everywhere Sunday. You can also read the article online at the link below. Joe Goode's show, Ashes will close May 24th. Please stop by.


After the fire, Joe Goode finds a new passion, By Anne-Marie O'Connor 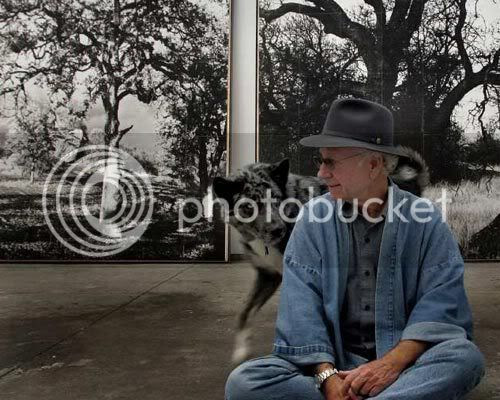 Posted by dnj gallery at 5:03 PM No comments:

Artist, Holly Andres is featured in the May 2008 issue of art ltd. Magazine. The article, "Young at Art: 15 Artists Under 35" is shown below, and can be found on page 50 in the magazine. Pick up a copy, on stands now. 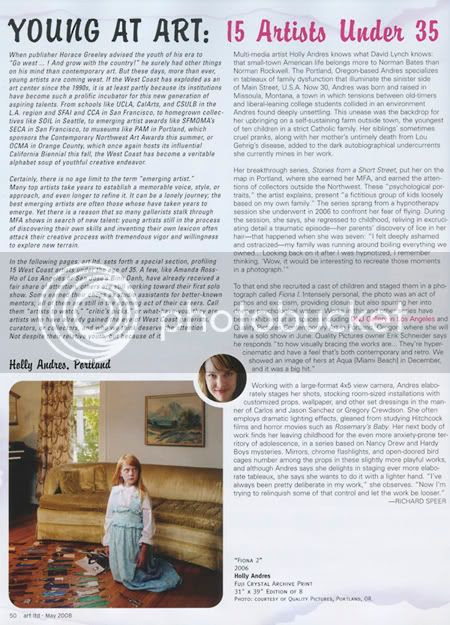 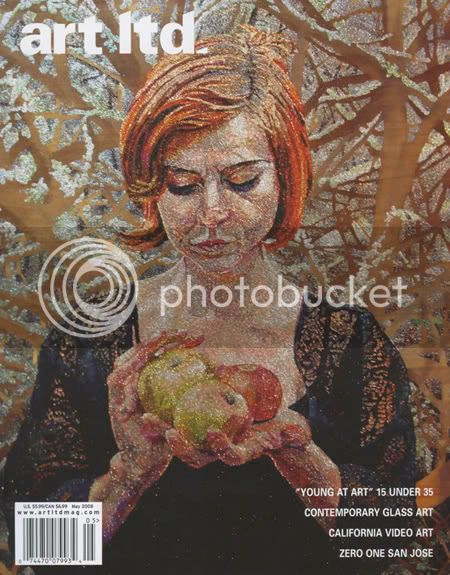 Posted by dnj gallery at 4:27 PM No comments: