dnj Artist Dylan Vitone will be featured in "About Face" at the Nelson - Atkins Museum beginning August 9th.


"This exhibition will explore the breadth and global diversity of contemporary photographic portraiture since 2000, highlighting recent acquisitions to the museum's permanent collection.

About Face will include works by twenty-nine artists from the United States, England, Canada, France, Germany, Russia, Japan, Iran and South Africa. Though each of these photographers approaches portrait-making differently, certain thematic threads resonate throughout the show, including questions of racial, cultural, ethnic, class and gender identity; the relationship between individuals and typologies; the way photographic processes themselves inform meaning; the relevance of historical precedents to contemporary practice; and the impact of media stereotypes on self-presentation. Considered collectively, the works in About Face offer a provocative and engaging forum for considering the question: how do we define portraiture today?"

To learn more about the exhibition, visit the Nelson - Atkins Museum's website here.
The second exhibition that Dylan will be participating in an exhibition/silent auction at the Phoenix Art Museum, INFOCUS.

To learn more about the exhibition in Phoenix, click here.
Posted by dnj gallery at 5:31 PM No comments:

Here are some snapshots of our installation at Step Shoes for the Montana Avenue Art Walk.  The work pictured is by dnj Artists Dan Shepherd, Dale Johnson, Bill Sosin, and Cynthia Greig. 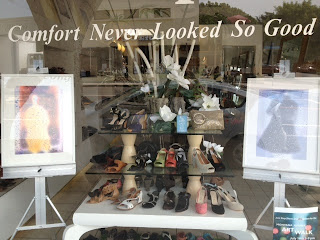 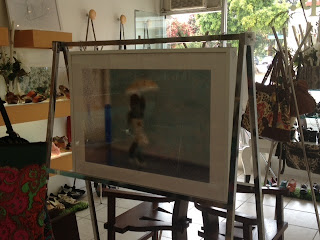 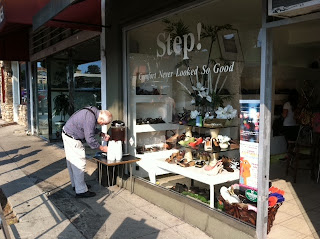 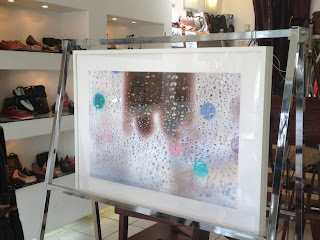 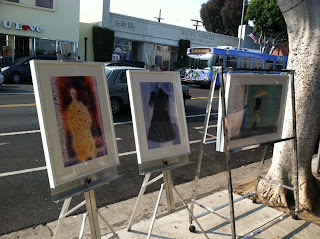 Posted by dnj gallery at 4:09 PM No comments:

Recent exhibitions by dnj Artists Max MacKenzie and Jody Zellen have been featured in a review by Peter Frank on The Huffington Post. 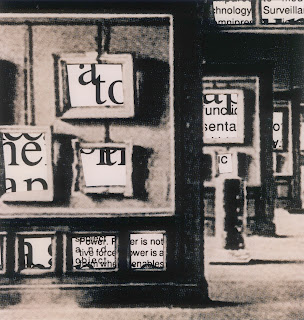 "Max Mackenzie's large color photographs of American landscapes, images in which the atypical is drawn from the typical, contrasted strikingly with the intricate, concept-driven photomontages of Jody Zellen - although Zellen's work, too, is devoted to the revelation of the unusual amidst the standard. The optically bountiful aesthetic Mackenzie exploits elsewhere supports an entire postcard industry, but his sensibility leaves no room for such saccharine banality. Rather, by focusing on near-abstract patterns in tilled fields and, even more pungently, abandoned structures isolated amidst glorious landscapes, Mackenzie at once abstracts American topography into painterly fantasy and sets a tone of mystery and melancholy even while saturating his images with glorious, hyper-natural color. Indeed, Mackenzie's amplification of the picturesque, as well as his architectonic sense of space, serves to de-romanticize his subjects without divesting them of their pathos. Zellen's aesthetic is as dense and urban as Mackenzie's is vast and rural, and by populating her collaged, often text-filled cityscapes with computer-drawn or - captured human figures - and by installing her small prints in clusters spreading out across the wall in all directions - she goes to great lengths to convey a heightened sense of metropolitan anxiety. Ultimately, however, the sense of dread pervading Zellen's stylized cityscapes mirrors the horror vacui with which Mackenzie imbues the American outback. The beauty of his images and the antic charm of Zellen's both warn us of our presumptions." - Peter Frank
Posted by dnj gallery at 3:05 PM No comments: 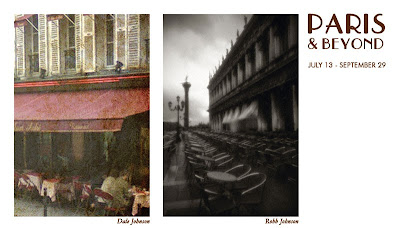 "The photographs in the Paris Portfolio were made to capture the feeling of 'Old Paris' - the City in it's various facets; narrow lanes, old buildings, busy cafes and shops with their window displays."
- Dale Johnson

To learn more about the exhibition and Weston Gallery, click here. 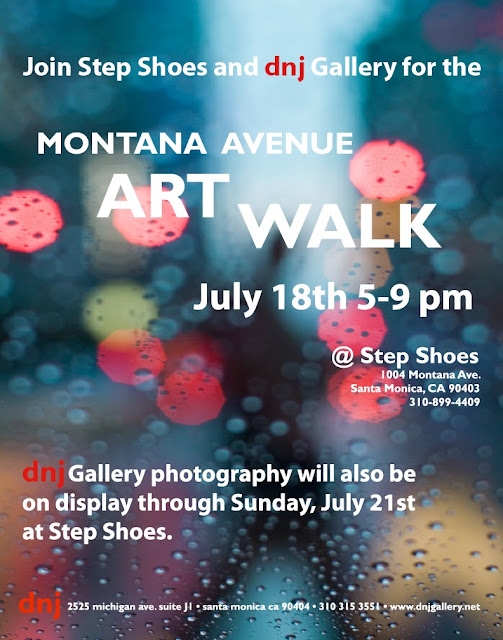 dnj Artist Laura Parker is currently featured in One of a Kind, at Rayko Photo Center in San Francisco.

The exhibition will be on view through September 1, 2013. "RayKo’s summer show highlights photographers who are making one-of-a-kind prints. Everything from photograms to collage to cliché verre prints to manipulated Polaroids. While some of these processes harken back to the first days of photography, these aren’t like anything you’ve seen before."

Laura Parker’s discovery that exposed and developed sheets of color photography paper could be used to translate a series of physical marks led to her series of “Photo Rubbings.” Suddenly a piece of chromogenic paper, when pressure is applied, could become a labyrinth, a leaded window, a double-headed axe. Shapes and occasional colors advance and recede, sometimes just a hint of the object under the paper, sometimes the object multiplies into complex patterns.  An old printmaking process adapted to modern times.

To learn more about the exhibition and Rayko Photo Center, click here.
Posted by dnj gallery at 4:05 PM No comments: 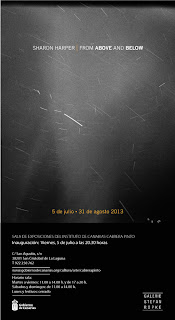 Sharon Harper's work jettisons this idea of the photograph as a seamless window to reality and replaces it with a magic mirror, a transformative surface that is capable of making the invisible visible and the intangible tactile.

"Sala de Arte Instituto Canarias Cabrera Pinto is pleased to announce the solo exhibition, From Above and Below, of American artist and Guggenheim fellow for 2013, Sharon Harper. The exhibition opens July 5, 2013 and runs through August 31, 2013. Harper's work, which has been shown and collected internationally, is represented by Galería Arnés y Röpke, Madrid, Galerie Stefan Röpke, Cologne, and Rick Wester Fine Art, New York.

From Above and Below features twelve years of Harper's photographs and video stills exploring perception, technology and the night sky. Her experimental images draw on varied uses of photography to create poetic connections between ourselves and the environment. Harper's first monograph, From Above and Below, Radius Books, 2012, accompanies the exhibition.

Harper's contemporary art practice expands notions of photography and pushes uses of photography into the realm of poetry. Artist and Professor Catherine Wagner says, "From Above and Below reminds us of the necessity to engage in the act of 'wonder.' Sharon Harper's photographs of constructed observations read like poems of knowledge."

Harper's pictures challenge the seamless surface of photographs, and shift our attention to a relationship between the camera and the way we perceive photographs. Throughout From Above and Below the camera impacts the record it keeps, which is ultimately a visual dialogue transcribed by the image-maker and the camera together. This relationship is a metaphor for the myriad ways technology and art affect and ultimately facilitate our understanding of our surroundings. Charlotte Cotton, curator, writer and author of The Photograph as Contemporary Art says, "Harper reads our celestial skies with a unique combination of scientific and symbolic meaning."

Sharon Harper was born and raised in Stamford, Connecticut. She received her MFA in Photography from School of Visual Arts in 1997. Harper's photographs are in the permanent collections at the Museum of Modern Art, New York, Whitney Museum of American Art, New York, The Albright-Knox Art Gallery, Buffalo, NY, the Museum of Fine Arts, Houston, the Harvard Art Museums, the Nelson-Atkins Museum, Kansas City, Missouri, and The New York Public Library, among others. She has received numerous artist-in-residence fellowships including at the Headlands Center for the Arts, Yaddo, the MacDowell Colony, Ucross Foundation, Vermont Studio Center; and most recently Halsnøy Kloster, Norway. Harper's work has been exhibited internationally and is represented by Galerie Stefan Röpke, Cologne and Rick Wester Fine Art, New York. She lives in Somerville, Massachusetts and is currently a Professor, Visual and Environmental Studies at Harvard University. She is a 2013 recipient of the John Simon Guggenheim Memorial Foundation Fellowship. "

Posted by dnj gallery at 4:29 PM No comments:

Hung Liu: "Portraits of a Chinese Self" currently on view at Turner Carroll Gallery 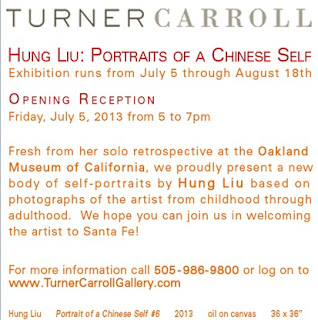 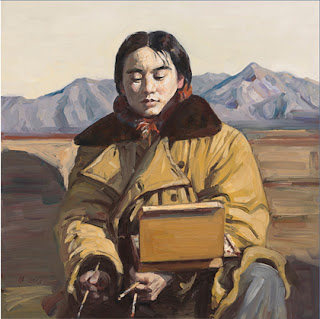 Hung Liu was a professor to the owner of dnj Gallery.

Posted by dnj gallery at 4:10 PM No comments:

dnj Gallery is pleased to announce that dnj Artist Ginny Mangrum has been featured in this month's issue of ArtLA. 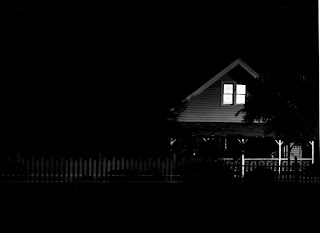 Posted by dnj gallery at 4:06 PM No comments: