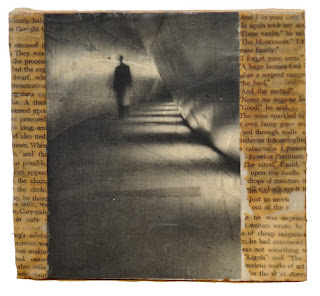 To see more images from Helen's amazing Encaustic Noir Series, please stop by the gallery at Bergamot Station for a visit.
Posted by dnj gallery at 4:10 PM No comments: 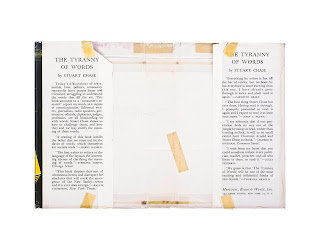 A big congratulations to dnj Gallery artist, Andrew Uchin, for his recent review in the Culture Monster section of the LA Times! And thank you to Sharon Mizota as well for writing such a wonderful review!
Andrew's show will be on view a dnj until September 10, 2011 so be sure to stop by the gallery for a visit and see this amazing body of work in person!

As books are increasingly made of pixels instead of paper, it's not surprising that their quaint physical form should become fodder for artists. Andrew Uchin's spare photographs of the covers, spines and other parts of old tomes at dnj Gallery look like little abstractions, but are also paeans to the appealing physicality of books.

Isolated on white grounds, the images sometimes evoke painting. An illustration from a children's book is mottled all over with abrasions, suggesting a very slow, quiet form of action painting. The back of “Voices in Stone” is a plain gray expanse punctuated by a white library checkout card. It looks as if it were carefully placed to resemble a Hans Hoffman painting.

In other cases, the works are small jokes. "Art and Anarchy" is opened to the dedication page, which reads, "To Diane, who refuses to read it." In "The Tyranny of Words" the book is missing entirely, leaving only the dust jacket: words about words about the tyranny of words. At times these ploys are too cute. The cover of "Visual Thinking" has been ripped off, leaving the title page fuzzy behind a translucent white end paper. The corner of a book bearing the running figure of the Modern Library series is creased upward, as if he were turning pages in his haste.

Uchin's images are strongest when they record the personal and often emotional attachments we form with books, charting how intellectual engagement takes physical form. In "Josephine," we see only the page edges of a book lying on its side. Across the edges, someone has written "Josephine" in large letters, and at each end, the words "Black Boy." The edges become a highly personal alternative spine — it's impossible to tell whether the book is titled "Josephine," or whether it is a copy of Richard Wright's "Black Boy" that belonged to someone named Josephine. Regardless, it's poignant evidence of a unique relationship one is unlikely to develop with an iPad.

Congratulations to dnj Gallery, artists, Annie Seaton and Bill Sosin, for their inclusion in "Splash!" and the recent review in the Ventura County Star!

Put artists next to water and their creative juices flow. Inspired by coastal waters, Southern California artists have found plenty of ways to interpret wet. "Splash! liquid energy spattered," an exhibition on display through Aug. 21 at the Carnegie Art Museum in Oxnard, celebrates our fascination with water.

The collection features 60 traditional and nontraditional artworks in diverse media by California artists. Themes represent water's recreational allure, beauty and transparency both realistically and abstractly. The images explore the impact and experience of water, from manufactured pools to natural waterways.

Congratulations to dnj Gallery artist, Michael Eastman, for his recent "ARTnews" review on his Plexagraphs series!

Posted by dnj gallery at 3:46 PM No comments: