Holly Andres' upcoming show Sparrow Lane at DNJ Gallery was recently reviewed and featured on the cover of the latest ArtScene. You can read the full article below, or pick up a complimentary copy at the gallery. The show opens December 20th, but the opening will not be until January 17th. 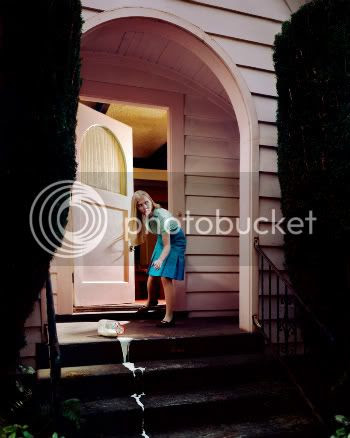 With a suite of fifteen color photos in a show called “Sparrow Lane,” Holly Andres has marked off a brilliantly chromatic bit of cinematic turf for fine art photography. In some respects, Andres’s narrative images amplify the aesthetic concerns first delineated by Cindy Sherman, Nan Goldin and Lauren Greenfield. Sherman’s chameleonic self-enacted narrative deconstructed B-movie images of women and Greenfield’s deceptively casual portraits of adolescent females critiqued a culture-wide consensus of sexual identity. In an atmospheric array of compelling photo images, Andres has combined both these conceptual issues and dramatically moved beyond them into a mysterious and starkly symbolic world. This realm seems to tap directly and powerfully into a collective, unconscious mind where archetypes loom and elide portentously through light and shadow.

Not surprisingly, Andres is also a director of photography who has worked on a number of films. The lighting in the “Sparrow Lane” photographs is a tour-de-force of ambience and mood. The placement of objects and characters within the scene or frame, is meticulous. The appropriate term for that nuancing is mise-en-scene, and it certainly applies to Andres’ images. They are highly theatrical, and it is a theater of flesh and blood within which the mind and spirit drift as transiently as light. With vivid primary colors, Andres depicts a moment of revelation or a mystery that is imminent and about to be revealed. Repeatedly the images seem to reference, in the most poetic and indirect manner possible, budding sexuality in the adolescent female. Enclosures, hidden spaces, apertures and the interplay of light and dark serve as visual analogues for the body and its phantasms of attraction and repulsion.

“Behind the Old Painting” sets a lovely context for “Sparrow Lane.” Two young girls in the background begin to peer behind a painted portrait of a matriarch dressed in Victorian mode. In the foreground another young girl peers warily out of frame as if standing guard for the two interlopers in the background. A veil of light plays around the painting as complementary red and green colors fix the moment in a perpetual unease. What is behind the painting? What is the secret of the past that is about to be revealed? These are questions this brilliantly unsettling scenario will ask in perpetuity. The clarity of the image and the chromatic playfulness counter the Gothic idea, looming subtly in the background, which is suggested rather than explicitly depicted.

The images have the universality and simplicity of fairy tales. This is visual poetry, however, that could only have been articulated by a feminine sensibility. Young girls of slightly different ages, together in a single scenario, seem to enact the arc of self-discovery that takes place between childhood and womanhood. Works such as “Outside the Forbidden Bedroom” and “Inside the Forbidden Bedroom” are joined with a single unspoken but compelling narrative conceit. “The Secret Portal” depicts young girls discovering and ascending through secret passageways out of a long hallway. The motif of discovery and encounter with a mystery, unidentified for the viewer, richly informs every work.

Two young girls dressed in blue and green are surrounded by an emerald forest in “The Lost Mitten.” They look intently down at a single red mitten floating on the surface of a small pond. The mitten itself is the brightest crimson and stabs the heart of the image with a unifying fixity. The color red seems to serve a central function in many of the images in the show. The dramatic work “The Red Purse” shows light emanating up from a vermilion purse onto the face of a young girl who has opened it. She regards its contents, unseen by us, with awe. In the background a girl in a bright blue dress looks underneath a bed with her head buried within the overhanging green blankets.

The work titled “The Spilt Milk” functions as a syllogism of the aftermath of discovery. A single overturned bottle of milk on a porch is shown as it is happened on by a young girl. The milk drips with deliberation down the steps of the porch into darkness.

Where sociology and identity politics could be said to inform the work of Sherman, Goldin and Greenfield, it is symbolic poetry that informs the work of Andres. This is visual symbology of a high order. Here, the body is gorgeously represented as a dwelling and conspirator in unfolding conundrums of personal feminine discovery.
Posted by dnj gallery at 12:16 PM No comments:

The Museum of Fine Art in Boston has acquired four works from Dylan Vitone's Pittsburgh and South Boston Projects, including Homeland Security Drill, Sprinkler, Easy Dunker, and Getting Band Aid in Bike Shop. If you are interested in any of these images please contact the gallery.

detail from Dylan Vitone Homeland Security Drill 2005
Posted by dnj gallery at 10:17 AM No comments:

Jonathan Gitelson's "Film Director," from his Dream Job series, is currently on display at The Milwaukee Art Museum in a selection of highlights from their permanent collection. The show will be up through March 3rd. Or, to see the piece in Los Angeles, stop by the Working show at DNJ Gallery this week before it closes on Saturday, December 13th.

Holly Andres' new series "Sparrow Lane" was recently featured in Art in America Magazine.  You can find the entire article below, and the series will be shown at DNJ Gallery December 20th through February 14th.  The opening will be held January 17th from 6-8pm. 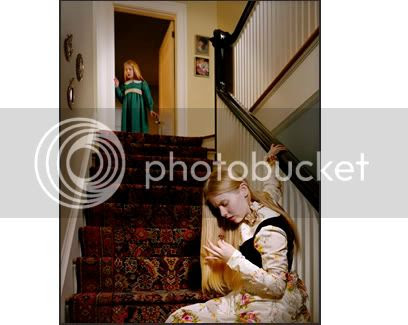 Holly Andres The Ruby Ring 2008 digital c-print 20 x 24 inches
International Exhibition Reveiws, Art in America
Portland
Holly Andres
Quality Pictures
Trained as a painter, Portland artist Holly Andres has found her true métier in photography and film.  Her new photographic series, “Sparrow Lane” (2007-08), focuses entirely on four girls, shown doggedly sleuthing in the manner of Nancy Drew and her chums.  Clad in party dresses or skirts and sweaters with white hose, these fair-haired friends explore a world of satin, lace, and patterned wallpaper, pursuing obscure mysteries as they search a house upstairs and down.  The 11 skill-fully staged and manipulated images are eerily beautiful with vivid, saturated hues and hallucinogenic detail.
What secret does the house hold?  That the enigma is a sexual one we surmise from Andres’s playful symbolism in Outside the Forbidden Bedroom, where two girls open a locked door with the insertion of a golden key.  With this artful cliché, Andres tips us to the allegorical significance of her story, and we hunt for deeper meanings.  The girls’ quest, we suspect, is ultimately self-knowledge; like all children, they probably wonder “where do I come from?”
The bedroom, as the site of conception, may yield an answer to this question of origins.  Once inside the chamber, a girl seated near a dressing table intently scissors open a velvet throw pillow as two others look on.  Curiosity about the maternal body is here metaphorically indulged, while outdoors two blondes kneel on the lawn to examine The Golden Pillow, its cottony insides exposed.  The composition resembles a Nativity, in which Andres’s youthful investigators ponder the miracle of birth.  Pink blossoms litter the ground, hinting at the girls’ waning springtime innocence.
In the basement, twins discover an empty bird cage.  One aims a flashlight inside it; the other glances up, searching for The Missing Bird. Two cats lurking in the shadows, possible perps, escape their notice.  It is a charming image of naiveté whose latent content—given the long-standing symbolic link between an empty birdcage and the loss of virginity—might involve sexual awakening.  Upstairs, the girls explore wondrous cubbyholes and drawers—read womblike spaces—sometimes leaving hallways strewn with snippets of hair and the telltale scissors.  Ladders and stairs recur, evoking Freud’s interpretation of staircase dreams as scenes of sexual activity.  Indeed, The Ruby Ring, an older girl on a carpeted stairway studies the eponymous treasure, a symbol for the female genitals, while her younger sister gazes down from the landing above.  Andres subtly and wittily acknowledges the possibility of such covert meanings with Behind the Old Painting, where the girls peek behind a framed portrait in the living room: similarly, beneath every manifest scene in “Sparrow Lane” a secret content awaits curious viewers striving to uncover it.
--Sue Taylor
Posted by dnj gallery at 1:34 PM No comments:

Please visit the upcoming exhibition at the Armory Center for the Arts featuring the work of Eileen Cowin and Laura Parker as well the work of over fifty other artists who previously exhibited at the Brewery Project.  The Finale show is being curated by John O'Brien, the founder of at the Brewery Project, and includes ten artist-organized exhibitions.
There will be an opening reception Saturday, December 6th from 7-9 pm and the show will run through March 1, 2009.  Please visit the Armory Center for the Arts for details.
Posted by dnj gallery at 5:28 PM No comments: