A big thanks to the Stephen Bulger Gallery for posting our LA Times review for DNJ Gallery artists Cynthia Greig and Suzy Poling to their blog!

To continue reading this article click here;
LA Times Blog
Posted by dnj gallery at 11:02 AM No comments: 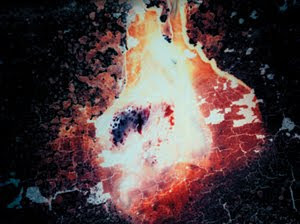 Poling, based in Oakland, intersperses photographs of geysers at Yellowstone National Park with images she’s made by painting, burning and otherwise manipulating photographic film. The two sets of pictures have a strong familial resemblance: the swirls and pools of amped-up color (fiery reds and oranges, metallic silver, lurid cyan) in the “Ellipses” look like close-ups of the molten, crusty and steamy landscapes. One group maps a place, the other a process. Both revel in extremes of color and texture, whether brought about by hand or naturally, over time. Both bring to mind the noxious beauty in Joe Goode’s “Ozone” paintings. 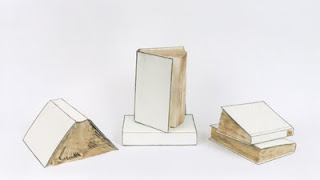 Greig’s photographs read at first glance as drawings but quickly reassert themselves as something else, hybrids of the manual and mechanical. Each of the “Representations” depicts a familiar object — telephone, boom box, pair of shoes, stack of coffee cups — in the center of a white, amorphous ground, comparable to a sheet of paper. Greig, who lives in Detroit, has painted each of the objects white, then articulated their edges in charcoal so that, when photographed, the objects appear to be outline drawings. And yet. Greig doesn’t push the illusion all the way but instead leaves enough evidence of her hand and process to allow the work to teeter, coyly, between two worlds.

Images: From the Ellipses series by Poling (top) and from Grieg's Representations series. Courtesy of the DNJ Gallery.
Posted by dnj gallery at 3:41 PM No comments: 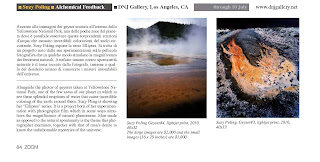 Posted by dnj gallery at 1:54 PM No comments:

Thanks to the L.A. Times for the fantastic review of Suzy Poling's, "Alchemical Feedback," and Cynthia Greig's, "Representations. The review appeared in the Calendar section of the Friday, June 25th issue. 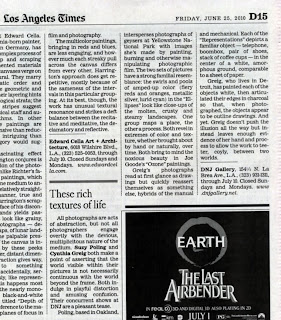 Congratulations to DNJ Gallery artist, David Trautrimas, for his inclusion in MOCCA's "Empire of Dreams: Phenomenology of the built environment" exhibition which opens Saturday, June 19, 2010 and runs through August 15, 2010. The exhibition is curated by David Liss and showcases several Contemporary artists from Toronto.

The things that we build embody our highest aspirations and our essential instincts to survive. They also express our will to find place, to establish dominion over territory, over our destiny. Empire of Dreams is an exhibition of recent work by artists that looks at ways in which we exist within our built environment – the phenomenon that is our experience and interaction with structures and architectures that shape complex sensory and cognitive relationships to our surroundings.

Empire is manifest through physical structure - the built environment - and also through intangible and arbitrary structures: economics, politics, and the social and cultural constructs that influence identity and our perception of our place in the world. The artworks selected and produced for Empire of Dreams convey the artists’ insightful and timely discourses around our ever-shifting relationships to architecture, urbanization, economic and cultural paradigms, utopianism, existing and imagined space; the physical and the fluid structures that characterize empire and define who we are.

The artists’ backgrounds are diverse yet are filtered through the common lens of living in Toronto, Canada in the year 2010. Though the exhibition and the artwork do not always reference Toronto specifically, this shared experience of living in a large urban centre inevitably reflects conditions of existence common to all of us in the age of globalisation, of an emerging global empire. Through a remarkable range of approaches, techniques and in various media, the works in Empire of Dreams awaken within us new understandings of our surroundings, of the worlds that we build and inhabit.

Empire of Dreams also includes a magazine-format publication documenting the exhibition, including text from the curator, interviews with participating artists, and contributions from prominent guest writers and theorists, produced in collaboration with new Toronto-based art journal One Hour Empire.

Congratulations to DNJ Gallery artist, Suzy Poling, for her inclusion in Flavorpill's online culture guide! Check out the link and be sure to check out Flavorpill next week to see more of Suzy's images! :-)

Suzy Poling's Alchemical Feedback is an exhibition of two different bodies of photographic works that compare and share the relationships of chemical reactions, spontaneity, and permanence. One of the series of photographs is taken of geysers from Yellowstone National Park, where Earth's feedback is presented in one of its finest forms. The geysers are a magma phenomenon, which is made up of strange colors, bacteria mat, and mysterious boiling pots of water and acid. Poling contrasts the geyser images with a project of experiments made with chemistry, oils, and decay, as well as burned photographic film. This series, called Ellipses, is equally accidental and unexpected as the mysterious geysers. These images contrast the human-made versus what is made by the Universe as it describes what is found and what is made up. There is an arc between these two works as it bridges the need to comprehend our relationship with astronomy exploration images, and also how surreal the Earth can look. The work suggests a human's need to understand nature's unknowns, as both projects embrace spontaneity and regeneration. Now on view at DNJ Gallery.
Posted by dnj gallery at 2:52 PM No comments:

Congratulations to DNJ Gallery artist Chris Verene! His work is included in "Exposed: Voyeurism, Surveillance and the Camera" at London’s Tate Modern. The show opens this week.

An exhibition intended to open discussion about surveillance and the gaze, Exposed: Voyeurism, Surveillance and the Camera opens this week at London’s Tate Modern. The show explores themes of eroticism, celebrity, violence and security in the world around us. Over 250 works have been selected by Tate Modern in conjunction with the San Francisco Museum of Modern Art.

“Human hunger for seeing the forbidden has not changed,” says curator Sandra Phillips from SFMOMA. “This show explores invasion and the rules of privacy.”

Its curators concede that words used in photography are also used in hunting. Capture. Shoot. Release. Like a hunter, a photographer either sneaks up on prey or chases after it. The strength in Walker Evans’ composition lies not only in a clever use of thirds, but in his covert methods. Nobody knows their photos are being taken candidly. Yale Joel photographed people as they arranged themselves in a one-way mirror – spying on people going about the everyday and capturing them at their most vain. Some people made a television programme based on that idea, franchised it and called it Big Brother.

Exposed is an intelligent and informed show. Everywhere you go in the exhibition, you cannot escape what artyfarts call “the gaze”. If you feel dirty viewing Gilles Peress’ images of the Rwandan Genocide, you should. If you’re captivated by Merry Alpern’s sneaked shots through a bordello’s window, brilliant. The show is showcasing the theft of privacy and questions the basic notion of privacy. You should walk out of it feeling like a thieving pervert. What steals your soul isn’t the act of photography, but consuming the image and walking away without considering it. You ask yourself at what point does nosiness and prying become art? At what point does the documentation of death and oppression become pornography?

Surveillance is a “functional image taken with purposeful intent”. As you walk around the show, look up. Find one of the five million CCTV cameras in the UK gazing at you with impassive regard. Then see if you can view the show with your new, more complicit eyes.
Posted by dnj gallery at 3:10 PM No comments:

A 45-minute lecture entitled "Alchemical Perceptions," led by Frank Navarro, will explore the notions of Alchemy, Feedback, Perception and Illusion in art through the works of major artists such as Bill Viola, James Turrell, Joseph Beuys, Olafur Eliasson, Iannis Xenakis. The lecture develops, deepens and enlightens these topics that are the conceptual starting points of Suzy Poling and Cynthia Greig in their current shows at DNJ gallery. In addition, artist Suzy Poling will be present to discuss her work after the lecture. Hors d'oeuvres and a spirited conversation will follow.

Participants must register directly on-line at www.art-gate.org/reserve.html by selecting Option 1 - $20 (per person).

This cost helps to support ARTGATE programs. Please feel free to contact the gallery with any questions regarding the event.

Posted by dnj gallery at 2:44 PM No comments:

A big thanks and congratulations to Chessa for her recent blog post and Honorable Mentions for her images juried during the competition. Here is what she had to say about the experience:

Women in Photography International - A DECADE OF IMAGES 2000 - 2010 Exhibition

I recently submitted my work to the Women in Photography International Decade of Images call for entries. There was one first place and one second place winner and I am very proud to announce that out of the thousands of images that were entered from women photographers around the world, two of my images were awarded an Honorable Mention.

I think that this is fabulous news! I received an Honorable Mention for one of my photographs in Summer 2009 call in the Children category so I was particularly thrilled to be recognized by the organization again.

The list of jurors is a venerable who's who of the photography industry so I'm even more thrilled and humbled.

Visit Women in Photography International to see the other winners - the work is so wonderfully diverse!

Here is some information regarding the call and the list of jurors:

Women in Photography International is excited to present "A Decade of Images" 2010 Competition call for entries to all photographers and artists. Choose images that made either a personal or public impression, brought you joy, awareness, caused pain or tugged on your heart strings -- how you see the world in which you live, the world around you. The climate changes, events, parties, weddings, every day living. Think of the Edward Steichen’s "Family of Man" exhibition. This is a capsule of time representing and showcasing women's work during the years 2000-2010.

And, here are my winning images: