Suzy Poling's Ferris Wheel image will be featured in the January 2010 issue of Harper's Magazine, so be sure to check it out!

DNJ Gallery artist, Richard Gilles, and his show titled, Signs of the Times, was recently featured on SQUARE CYLINDER.com. Richard will be showing this body of work here at DNJ starting January 23 - March 6, 2010, so make sure to stop by for a visit!

Wherever you find abandoned buildings, cyclone fences, razor wire, graffiti, dirt tracks, lonesome highways and homeless living in cars – that’s where you’ll find Richard Gilles: camera in hand, making panoramic pictures out of vistas that are everything but picturesque.

His latest series, Signs of the Times, on view at b. sakata garo through Jan. 2, Gilles consists of empty billboards that show what remains when advertising’s projection of desire is short-circuited by a lack of cash. At first glance, you might wonder how much juice can be squeezed from so hollow a fruit. But here, as in prior projects of this sort, Gilles reaps big harvests from a deceptively simple approach. Rather than aim for indictments or sweeping statements, he lets photography’s deadpan power – its natural adhesion to fact — do the heavy lifting. Signs doesn’t just speak about our soured
economy; its vacant billboards and desolate landscapes speak of economic and environmental hubris as well as a kind of spiritual vacuum in regions where billboards fill the 70-mile-an-hour gap between cities, suburbs, mountains and farmland. (These shots were taken in California and Nevada.)

This, of course, is not new territory. Photographers from Walker Evans and Robert Frank to Stephen Shore have wrung the pictorial equivalent of novels from signs that commented slyly, ironically or nonsensically on their surroundings. So have many of the New Topographics photographers. Gilles definitely stands on their shoulders. But his work also seems to be aligned with the sensibilities of contemporary chroniclers like Andreas Gursky and Thomas Struth, artists whose monumental banalities magnify nothingness to wall-sized dimensions. There is also a link between Gilles and the work of Bernd and Hilla Becher whose career-length obsession with industrial structures serves as a kind of template. I’d be remiss, too, if I didn’t mention Hiroshi Sugimoto’s time-lapse movie theatre pictures. Gilles’ vacant billboards really do resemble Sugimoto’s blank movie screens — even if the motivations of the two artists are worlds apart.

Gilles, unlike the purveyors of super-sized prints to which the art market, before the crash, became addicted, shows emptiness at a reduced scale; his largest pictures are 27” x 57”. They’re not small, but they’re small enough to force you to hunt for telling details. Do it and you’ll discover, in the 21 works on view here, things that push them beyond the ostensible subject of outdoor advertising’s demise.

Peckman 3040, an elevated freeway ramp flanked by two empty billboards is, from a formal standpoint, an extraordinary picture. The curve of the concrete and the shadow it casts, serve up sensuousness where you least expect it. You can marvel at it, but you can’t really savor it. The scale of the highway and the empty signs show the brutality inflicted by the auto on the landscape and how the vastness of the desert itself magnifies humanity’s insignificance in the greater scheme of things.

Perhaps the most interesting transformation highlighted by Signs is how billboards, when emptied of content, switch from being visual pollution to being blank slates on which viewers can project anything. Gilles probably didn’t intend this, but he certainly captures that potential when he photographs billboards outside cities at dusk. Pictures like Olympia 4547 show how, instead of arousing the desires of motorists, these blank screens seem to be lying in wait for passersby to engage in a little free-form culture jamming of their own – a fact underscored by the razor wire fence that guards the billboard in, another picture, Ad America. Look closely at this image and you’ll other important details, like a billboard for the 40 Deuces, a burlesque club, and a cluster of under-construction buildings that seem, in their unfinished state, to be waiting for time or circumstance to reclaim them, too.

I laughed when I saw Faddis 1100, a picture of a billboard situated on hairpin curve in a spot where no one, save the ambitious rubbernecker, can see it. The curvature of the sign, which mirrors the shape of the road, probably doesn’t exist. I suspect that when Gilles saw the ready-made joke before his lens he chose to enhance it by subtly altering the sign electronically, after the fact.

Like a comedian, Gilles recognizes that humor can say as much about a subject as a documentary treatise. Signs of the Times certainly does that. 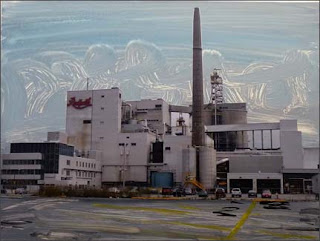 Dear Toronto: Canadian/Los Angeles artist Annie Seaton (she was born in Toronto but moved here at the age of 12) has been making a successful living taking photographs of California’s big skies and sunsets and selling them at various galleries. It wasn’t until she went back to Toronto last year to visit family that a kind of odd epiphany hit her: “I became overwhelmed by Toronto’s beauty and I felt overwhelmed by a compulsion to capture it.” Seaton spent days taking photos of Toronto streets and landmarks such as Honest Ed’s and the Redpath Sugar plant. “I know I’m seeing beauty where others may not. The sky in L.A. is filtered through smog. The sky in Toronto is magical; the sun is golden and Lake Ontario sparkles with the purest of blues.”

Seaton, 42, took the photos back to her studio and played with them, adding in painted swirls here and stripes of colour there. The works debuted at the DNJ Gallery in Hollywood last month. The Canadian consulate here passed the word and a load of ex-pats showed up for the opening. “At the opening, people who grew up in Toronto became very emotional. They were saying, ‘Oh, that’s near where I grew up, I forgot how beautiful it was’.” Seaton calls the exhibit, on until Jan. 14, her “love letter to Toronto.”

But she’s not done with the city yet. “These photos I took in May. I’m going back this winter for the next series.”


massarellalinda@yahoo.com
Linda Massarella, a Canadian writer in Los Angeles, writes every Sunday about notable Canadians living in L.A.
Posted by dnj gallery at 11:44 AM No comments: