The night will be devoted to bebop in a fitting end for the festival that coincided with Santa Monica's citywide read of Raymond Chandler's hardboiled detective novel, The Lady in the Lake.

“It was an amazing coincidence since they had already chosen Raymond Chandler as their author for 2012, and as I don't believe in coincidences, I immediately knew that the festival was meant to be,” said organizer Helen K. Garber.

Garber created NoirFest to celebrate her love of the sexy, black and white crime dramas and her 30th anniversary of living in Santa Monica with her husband, Stuart Garber.

“I was excited to share Noir with my favorite venues and organizations of Santa Monica,” she said. “Although small in size, geographically, Santa Monica is as an amazing cultural destination as it is a play destination.”

Persian photographer Gyula Halasz “Brassai” inspired her love for the genre, which she's incorporated into her own work as a photographer. Garber recently taught a class for the Otis Art Institute as part of NoirFest, sharing her nighttime shooting techniques and favorite Santa Monica settings, including the historic pier.

NoirFest Santa Monica has included art, film, photography, literature, music and scripted events at various historic venues across Santa Monica. Work on the festival began in 2010 when Garber approached the city's Cultural Affairs department, which agreed to produce a virtual tour of local places associated with Chandler and his novels. The tour included a presentation from Judith Freeman, a leading Chandler historian and author of The Long Embrace, who illustrated the history of the many homes that Chandler occupied while living in Los Angeles.

Then she connected with organizers of the citywide read who were preparing for the program's 10th anniversary. Noir experts, Freeman and Alan K. Rode jumped on board along with the American Cinematheque and the Santa Monica Conservancy.

"I had no idea there were so many people into noir," said Pamela Schoenberg, owner of dnj Gallery, which hosted two of the events. "It was a wonderful experience... both events were well received with large crowds."

Ultimately, Schoenberg said the events were successful because of the number of people who love noir, a genre that's grown in popularity recently with the HBO prohibition drama Boardwalk Empire.

NoirFest’s closing celebration will be at Hotel Casa del Mar from 7-10 p.m. Wednesday. The hotel will offer a special menu, which will benefit two area Jazz organizations, KJAZZ and the Barbara Morrison Performing Arts Center. Guests are encouraged to wear vintage attire.

Admission is free. There will be a cash bar. 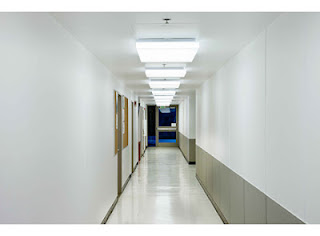 dnj is proud to announce that we will be hosting an Artist Talk with one of our currently exhibiting artists, Gil Kofman. He will be discussing his current work and exhibition "Passages: Case Studies in Euclidian Seduction." His work involves deep studies of perspective, vanishing points and the everyday menial space. He hopes to call attention to those seemingly insignificant places, that we may pass through without a second glance. Come see us here at dnj so you don't lose your perspective! The talk will take place here at 1pm this Saturday March 31st.
Map and Directions Here
Posted by dnj gallery at 12:41 PM No comments:

Michael Krebs has won the CCA AWARD in the category "ROOKIE OF THE YEAR".

The CCA (Creative Club Austria) is an award in Austria given to the creative industry. They honor the best advertisements created. "The Rookie of the Year" is an award for the best diploma project of the year completed by a student. 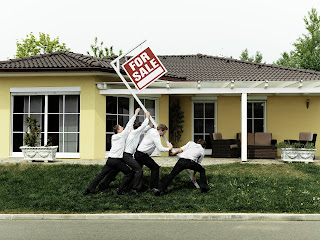 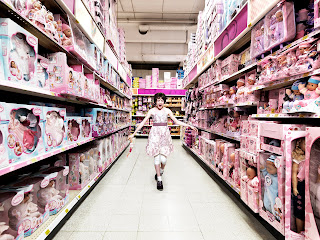 Posted by dnj gallery at 5:44 PM No comments:

Site Specific: LAPCS and the Politics of Community

Support dnj Artists! One of our artists, Darryl Curran is featured in the current show, Site Specific: LAPCS and the Politics of Community, at the Fisher Gallery at the University of Southern California.
Take a listen to a brief talk from KCRW:
Artist Talk
Check out the LA Times Review Here:
PST, A to Z: 'Site Specific' and 'In Focus'
The Los Angeles Center for Photographic Studies (LAPCS), was founded in 1973 as a response to the closing of the Pasadena Art Museum. It was an artist run space to provide themselves with a means to express and exhibit the photographic tastes of the time. Site Specific: LAPCS and the Politics of Community surrounds many of these LA artists in a historical review of iconic 1970s photographers including Robbert Flick, William Mortenson and many others. The show is on view at the USC Fisher Gallery until April 7th.
Hours and Directions to Fisher Gallery

Posted by dnj gallery at 1:05 PM No comments: 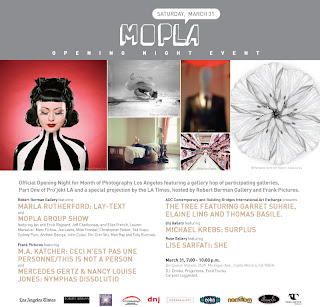 Please help dnj Gallery along with other Bergamot Station photography galleries celebrate Opening Night of the Fourth Annual MOPLA, Month of Photography LA. We will be open special after gallery hours. Please check with dnj to check specific times.
"DJ's. Drinks. Food Trucks. Carpool suggested."
Posted by dnj gallery at 11:40 AM No comments: 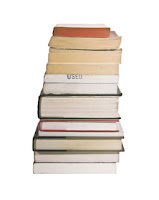 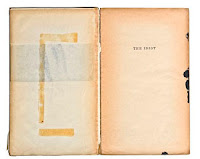 ARTBOOK @ Paper Chase is located at 7174 Sunset Boulevard, on the corner of Sunset and Formosa, two blocks west of La Brea. http://www.artbook.com/artbook-at-paperchase.html
"ANDREW UCHIN | BETTINA HUBBY: A TO B AND BACK AGAIN" is on view through April 4th, 11am - 4pm Wednesdays, Thursdays and Fridays.
Posted by dnj gallery at 8:35 PM No comments:

Internationally acclaimed photographer and UNM professor emeritus Patrick Nagatani has been working on his Tape-estries series of layered masking tape and photograph artworks since 1983. Throughout that time he has saved all the trimmings of tape generated in the process of creating these pieces. Leigh Anne Langwell's recent photograms explore the poetry and beauty reflected in the cells, structures and chemical memories of the body. Together, they are creating a magical immersive installation within the Axle Contemporary mobile gallery. Using balls of masking tape trimmings and Langwell's photograms, they will create a cavelike space that suggests alternative places, spirituality, the universe and the inside of the body. At the far end of the cave will be Nagatani's Chenrezig tape-estry. Chenrezig (Avalokiteshvara) is a Tibetan Buddhist deity. He made a vow that he would not rest until he had liberated all beings from suffering, and embodies loving kindness and compassion. 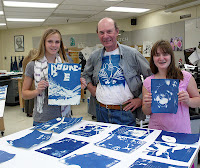 Darryl Curran presented a photography workshop to Harvard-Westlake middle school students on Friday, March 9. Curran taught the students how to make cyanotypes, non-traditional photographic works that are made by placing objects on light sensitive paper in the sun. After the paper is exposed, the result is a striking silhouette of the object surrounded by a bright blue background.
A reception will be held on Tuesday, March 13, at 9:30m, in the gallery on the middle school campus, the Reynolds Hall Gallery. The finished artwork, as well as two pieces by Curran, will be on exhibit through March 23rd.

For more information, please contact the gallery.
Posted by dnj gallery at 12:28 PM No comments:

Thanks to everyone who made it out last Saturday for the opening of Michael Krebs' "Surplus" and Gil Kofman's "Passages: Case Studies in Euclidean Seduction." The shows are running now through April 14, 2012 so we do hope to see you again!

Posted by dnj gallery at 2:35 PM No comments: 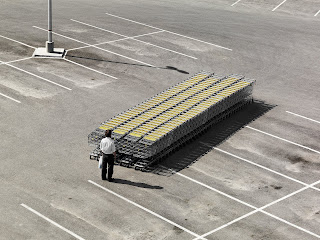 We are pleased to announce the upcoming exhibition "Surplus" by young Austrian photographer Michael Krebs at dnj Gallery. "Surplus" was exhibited at the Albertina Museum in Vienna and nominated for the International Photography Award in the category "Deeper Perspective". In "Surplus" Michael Krebs uses powerful references to iconic war photographs to visualize the modern western consumer's struggle. 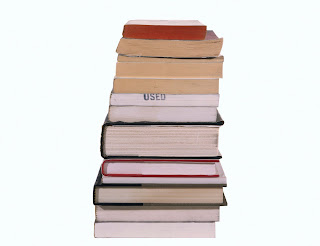 dnj Gallery artist, Andrew Uchin, will be taking part in a two person show happening at Artbook @ Paper Chase Showroom in Hollywood. There is an artist reception taking palace this Sunday from 4 - 7pm, so we hope you can make it out!

Andrew will be showing images from his "Reader Series" that were shown at dnj Gallery in 2011. Please visit us at Bergamot Station to see more of Andrew's images in person.
Posted by dnj gallery at 1:44 PM No comments: