MoonArk will be a philosophical mini-museum, left on the moon for future explorers to discover.

"Earth is giving a gift to the moon that will land on the lunar surface next year.
The nine-ounce MoonArk -- a tiny time capsule-esque artifact of humanity -- will be attached to a small lunar rover. This is in the hopes that one day it may be picked up by lunar explorers -- hundreds or thousands of years in the future." 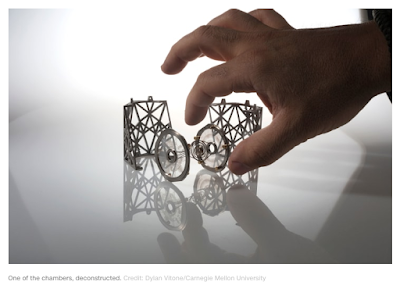 "There's a stunning visual of the FOXP2 genome structure, the gene that allows songbirds to make songs and humans to put words in order, said Dylan Vitone, professor of photography at CMU. The "out of Africa" concept explaining the spread of humanity is given a modern update, showing the light population and density over Egypt. It represents the growth of light and electrification to show the spread of humanity from the fertile crescent..." - Ashley Strickland, CNN